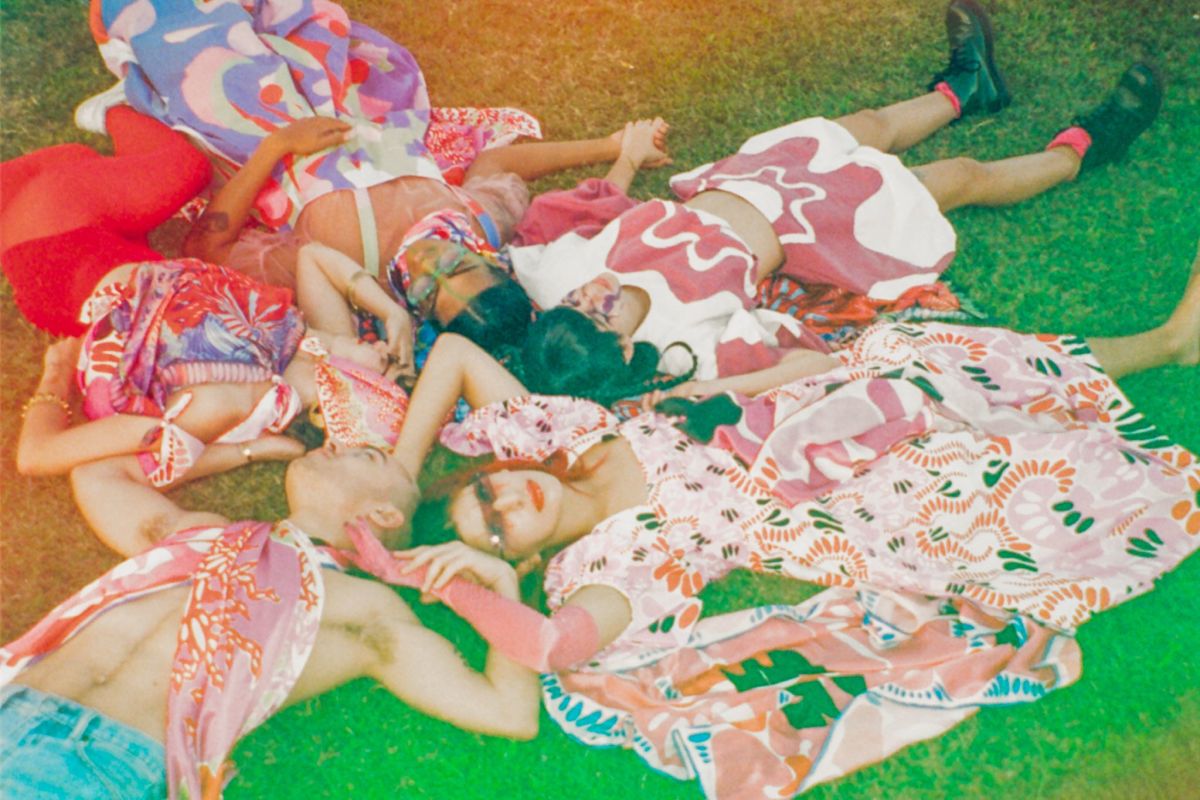 Amanda María Forastieri’s eponymous label has been in the making for over two years. But you could say that the designer has been preparing for it all her life.

“Fashion design is ancestral to me — making clothes was taught by my grandmother,” she says. “I always knew fashion design was it.”

What Forastieri wasn’t so sure about was the fashion industry: the speed at which things are produced and discarded, the non-stop demand for novelty, the exploitation and waste that everything creates. Even when she was a fashion design student at Drexel University, she thought about all this.

“I knew I wanted to have my thing… It was more that I realized that I have the privilege of actually opening a new door and a new way for people to think about different models, to maybe have a little bit of that excessive earnings growth and thinking about being more careful,” she says. “During university I was already in this phase of expanding my social and political awareness… I am a designer, but I feel that after my studies I have been able to explore my creative process in a way that is very was intuitive, and I realized this isn’t like how I’m being asked to design or create within the paradigms of traditional industry.”

Forastieri graduated in 2020 with an award-winning collection, a $10,000 scholarship and a desire to further explore what it would mean to pursue fashion on its own terms. She returned to Puerto Rico, intending to do little more than take a break. Instead, she started what she describes as a “very long research phase” during which she would spend time in New York City, Copenhagen and the island where she grew up.

“I started writing things on a blank page, thinking about how I could combine art with printmaking, and how that would fit in with a brand on a mission,” she says.

That brought Forasteri to New York to see “what kind of relationships I need to build to make the brand something that can support me and the people who make it on the island;” then to Copenhagen, where she wanted to learn more about sustainability in a place that has become known around the world for her efforts in this field; and always back to Puerto Rico, to establish those roots and connect with the projects already working to support a local supply chain.

She tuned in to seminars of Slow Factory’s Open Edu program (“they link this knowledge we need, these decisions we make about the clothing and the scale to the social and political realities of the world”), participated to a mentoring program that put her in touch with a Costa Rican textile designer (“during that process, where I felt very lost and confronted myself with myself, she gave me many suggestions of where to look, how to look, where to find myself. could teach”) and potential collaborators tracked down through the CFDA, brands like Mara Hoffman and the Public Library. She touched a lot of clothes, sent a lot of emails and talked to a lot of people.

“I had the clothing, the vision, the editing — that was a defining point for me, like, ‘I want to make my own way in this industry,’” she says. “You have to make money, but I just really want to try and build something new.”

All of this led to the July debut of her eponymous label: a clothing capsule made entirely in Puerto Rico, by the Cooperativa Industrial Creación de la Montaña in Utuado, and four scarves. She also collaborated with Brooklyn-based natural dyer Cara Marie Piazza to develop a deep magenta hue of flowers and insects; and with Orto Print Studio in London for the placement of prints. 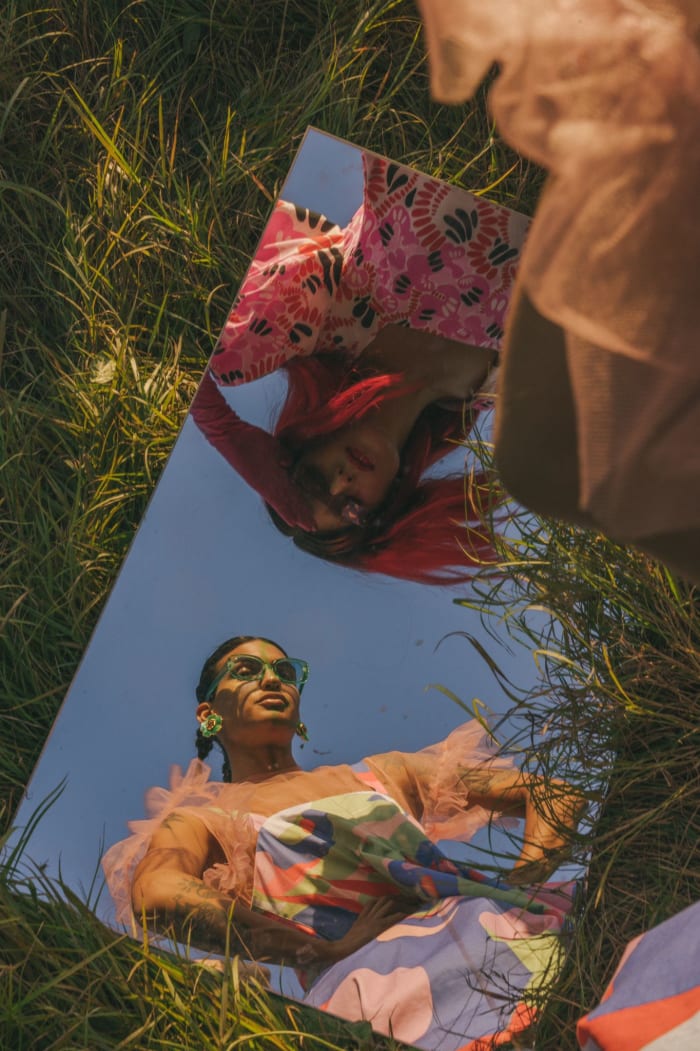 As Forastieri builds on the expressive colours, bold abstract patterns and voluminous silhouettes she introduced in her 2020 graduation collection, she continues to break away from the rigid structures that the industry requires from designers and brands, such as seasonality.

“It’s not collections — it’s a continuation of my previous work enhancing it, so it all comes together,” she says. “It’s not so much about creating new, new, new, new. I’m already thinking about how the materials I’ve bought for this collection – whatever’s left, what scraps – will be in the next It’s about interconnectedness, from every season or every capsule or collection I launch. I took my old designs and added new things. A lot of the process was very spiritual.”

When you purchase a piece by Amanda María Forastieri, you will receive a description of how it was made, from sketch to production. “I want people to interact with it not only visually, but also spiritually, so that they then make it something that feels close to them and makes them take care of it,” she says. Right now, “spirituality” for Forastieri is about our relationship with nature, how “nature’s cycle mimics ours” and, again, the interconnectedness of everything we do – “how the fibers are crossed, which fibers we choose, which communities we engage with, as well as which themes and topics we explore related to them.” 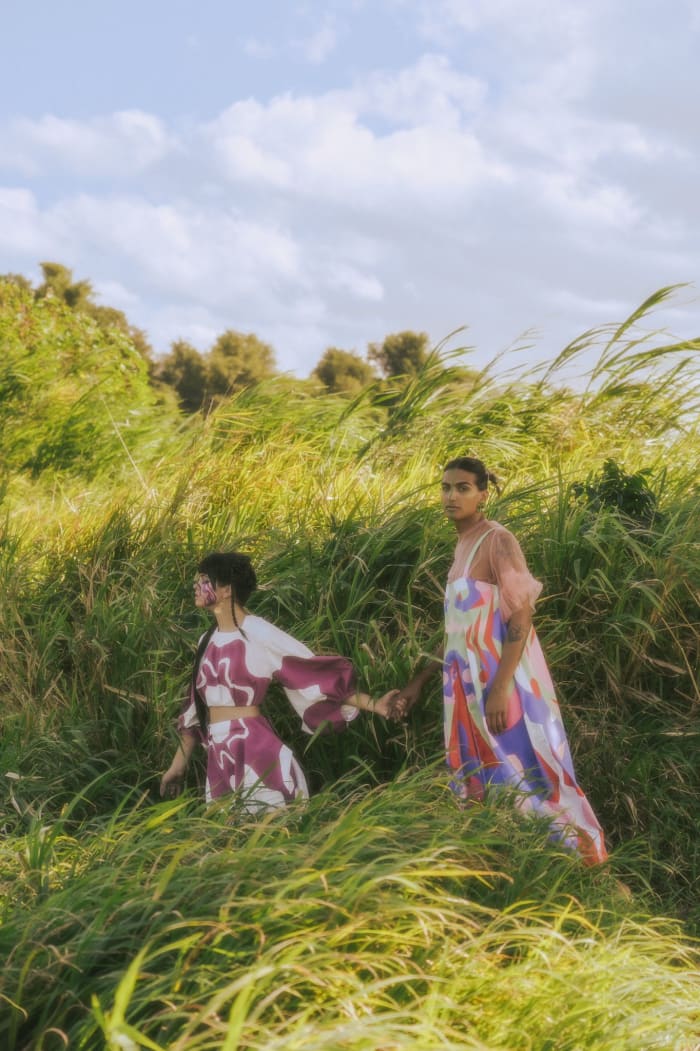 At launch, prices range from $150 to $3,000. Forastieri is well aware that that’s prohibitive for many, especially in Puerto Rico, and is already thinking about ways she can open up her art to more people — whether that be through rentals, public art installations, or something else — for which “from the traditional model of exclusivity,” she says. “I believe in accessibility, and that’s one of the opposites of sustainability in the world we live in today.”

There are many words Forastieri uses to describe her brand; “connectedness” comes up a lot and is perhaps the most appropriate. It touches every facet of what she is building: the intuitive way she designs, the attention with which she approaches materials, the circularity she pursues, the bridge she builds between her professional education and her community in Puerto Rico.

“[I always felt that] I need to build a cult following before going back [to Puerto Rico]because I feel like I can’t sustain what I’m doing and what I’m creating,” says Forastieri. However, the socio-political and economic reality on the island shifted the timeline: “With the pandemic and the earthquakes, a lot of [the Cooperativa Industrial Creación de la Montaña’s] income [has gone] — I saw that this was happening, and that this was more urgent… It was very satisfying to be directly involved with the people who made it and build a relationship with the person who really made everything.” 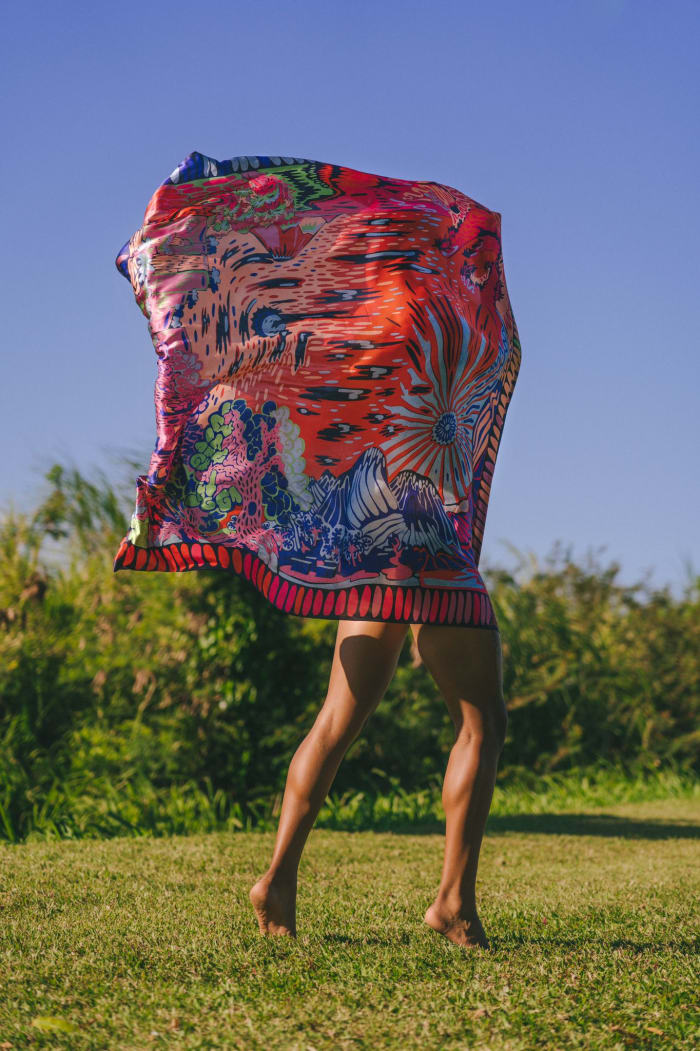 Forastieri is part of a collective of creatives and business owners who share a “vision…to do better in the industry” in Puerto Rico, she says. Through her work with the Cooperativa Industrial Creación de la Montaña and her time on the island building the brand, she has been able to meet creators in Puerto Rico who share her values ​​and aspirations, and who she hopes will become collaborators – like natural dyer Olga Sofia Galvo, the farm and textile lab Trama Putivo and the stationery maker Paper & Flowers.

She understands that her ultimate goal of mapping an entire supply chain and manufacturing operation in Puerto Rico, to create something completely different, “will go very slowly,” that “it’s a lot of shifts, a lot of learning, a lot of failures, a lot of success.” .”

“It’s about recognizing that things don’t work as efficiently there because of our circumstances, and accepting that as part of that reality,” she says. “There are people who want to invest in this and are open to waiting maybe three days because I didn’t have electricity to sew. It’s part of where we live. This is what you have to accept in order to develop this. It’s also sharing the vision with people; there are those who don’t see it yet. It’s not just fashion; it’s art and theater. It’s a whole community of creatives who are there and share it in a way that in coming back.” 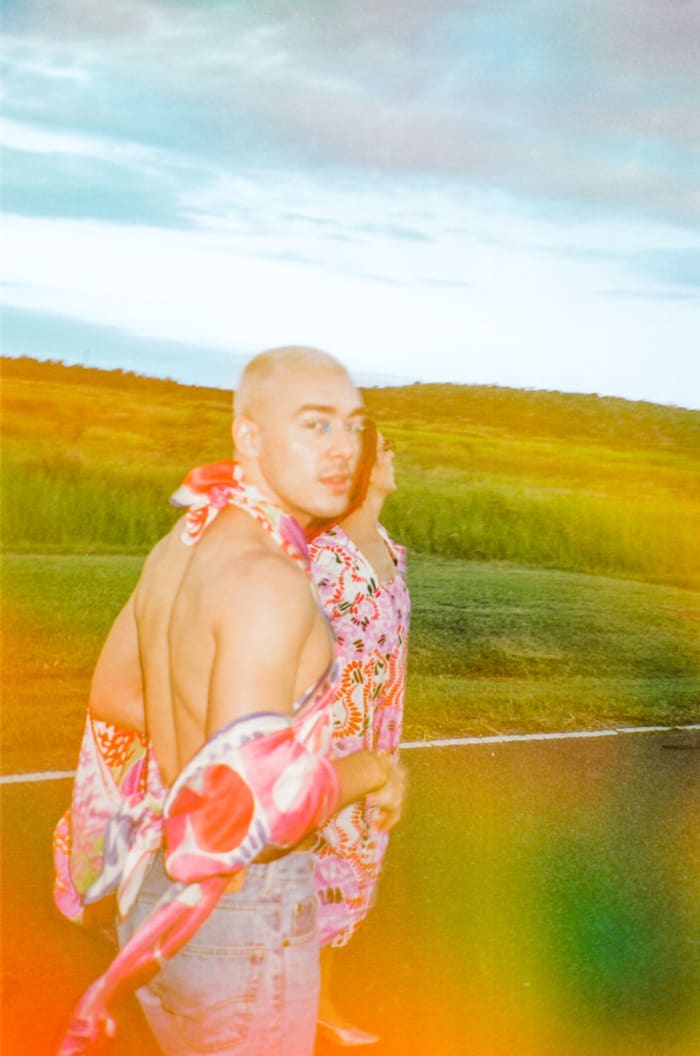 Amanda María Forastieri’s future outputs will continue to iterate and innovate – the designer is looking for ways to work with natural dyes in Puerto Rico, brainstorming how to use more second-hand fabrics and figuring out how to improve her materials. “Sustainability is a constant research phase,” she says. “You try new things, especially if you want to make pieces that are durable and very durable — it takes a while to find that formula.” 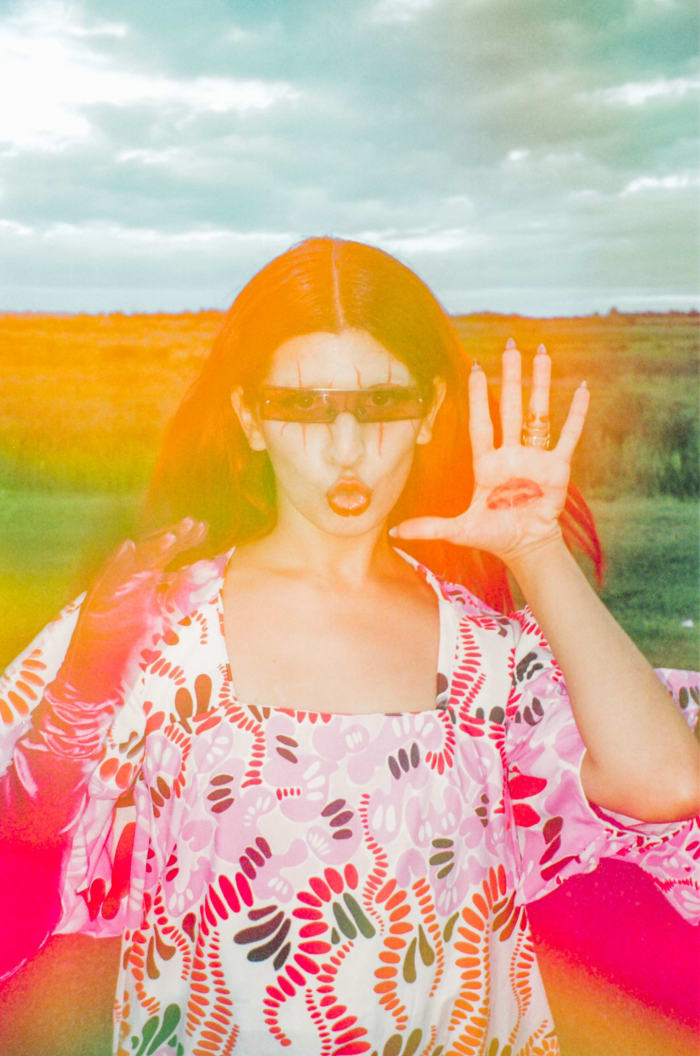 Now that she’s in the “construction phase,” as Forastieri puts it, she’s next on the hunt for a more permanent workspace in Puerto Rico. “I’ve been walking around with all my materials and it’s very tiring, but it also doesn’t really let me do the mess and experimentation,” she says. After launching this initial offering, she’ll see how it performs financially and figure out the next steps, whether that’s targeting new customers or partnering with like-minded retailers. Then it’s back to the proverbial lab: “I’m going to experiment with upcycling – I’ve already collected some materials for that – and print on existing textiles.”

She also thinks about what the brand looks like outside of the clothing medium. One idea is “coloring books for communities where you can do something and then have someone else next to you that you don’t know…I always picture it in parks, in public spaces,” she says. “Of course it can exist in a gallery, but if it’s a public space, more people can enjoy it.”

was original published at “https://fashionista.com/2022/07/amanda-maria-forastieri-puerto-rico-fashion-brand-interview”

Share
Facebook
Twitter
Pinterest
WhatsApp
Previous articleThe best unitards to wear according to a fashion editor
Next articleSelena Gomez bursts into tears when her grandma asks about a recent breakup while filming TikTok: Watch