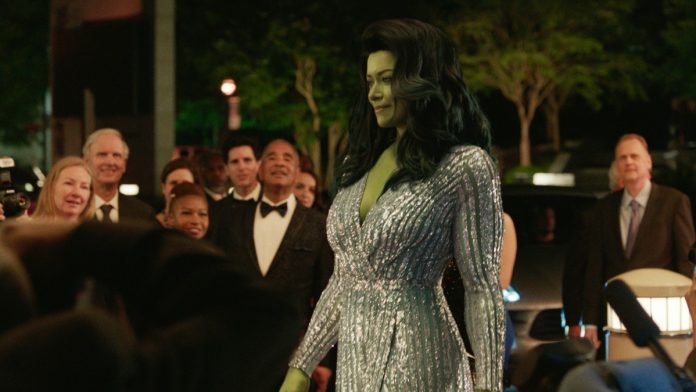 Warning: Spoilers for all episodes of ‘She-Hulk: Attorney at Law’ below.

Of course, “She-Hulk: Attorney at Law” is a Marvel superhero series about the Hulk’s (Mark Ruffalo) – aka Bruce Banner’s – cousin Jen Walters (Tatiana Maslany), after accidentally giving her her own green supersized alter-ego in the aftermath of a car accident. As a woman, she is used to managing her inner anger and emotion on a daily basis. So she becomes a reluctant superhero – and her ‘She-Hulk’ character becomes public information.

There are insane reveals of supersuits, brutal MCU Easter Eggs and surprising cameos, like (the real) Megan Thee Stallion twerking in pink Balmain, Wong (Benedict Wong) crying over “This Is Us” and Matt Murdock/Daredevil (Charlie Cox ) take a morning after walk. But the fourth wall-breaking comedy, created and written by Jessica Gao, is also an action-packed adventure through a fashion-focused lens, thanks to costume designer Ann Foley.

Foley knows a thing or two about supersuits: She worked on Marvel’s “Agents of Shield”, “Altered Carbon” and the upcoming “Masters of the Universe”. Moving on, the series’ costume designer revisits the fashion moments in “She-Hulk: Attorney at Law” and shares behind-the-scenes facts about the best-dressed superhero on the small screen.

Under the direction of her new boss at GLH&K, a prestigious superhuman-focused law firm, Jen must confront clients (and colleagues) in She-Hulk mode. But finding a good-fitting suit proves challenging until Luke Jacobson designs her a high-tech skirt suit that instantly adapts to a perfect fit from Jen to She-Hulk, and vice versa.

“I wanted it to be purple, as a nod to the color scheme in the comics,” says Foley, adding that she also wanted it to draw on “high-end fashion designers like Alexander McQueen — “just beautifully tailored suits from which turned out they were made by Luke Jacobson, our in-house Edna Mode.” (Imogene Chayes drew concept art for the suit.)

Behind the scenes, designing the Jen-to-She-Hulk wardrobe required a team of craftsmen, starting with Marvel’s head of visual development Ryan Meinerding, who designed She-Hulk’s height and muscular body. Next, 6-foot-5 actor Malia Arrayah joined as the on-set reference for Jen’s much-discussed, CG-enhanced transformation into She-Hulk; Foley worked with Arrayah and a body shape created from a cast of the actor to accurately “work out the math” of accurately portraying the wardrobe aspect of Jen evolving into She-Hulk.

The jewel-colored office skirt suit also serves as a teaser of sorts for the big reveal of the supersuit, drawn by concept artist Jackson Sze.

She-Hulk (literally) jumps into the scene in a purple and white sporty wrestling onesie silhouette and high tops during a pretty hot fight with Daredevil. The futuristic armor-like panels are printed with a special “iridescent ink” with a layer of foil applied to create a 3D-like depth. Foley’s team — including costume fabrication foreman and cutter Marilyn Madsen — stitched each of the stretch-knit panels onto the supersuit by hand.

“[The supersuit] feels like the character, and it also feels empowering,” Foley says. “That’s one of the great things about the show: there are so many badass women [involved]from our directors to [executive producer] Wendy Jacobson and even our cast. One of the things that was so inspiring about working on the show was being surrounded by all these really amazing, amazing women and being able to tell this fun story.”

There’s also, of course, Jen/She-Hulk’s prom dress, which has its own backstory for a few episodes, starting with the quest of Nikki (Ginger Gonzaga) and sneakerhead attorney Pug (Josh Seggara) to enlist the services of the ultra- exclusive superhero tailor, Luke Jacobson (Griffin Matthews). With her glorious butterfly waves blowing in the wind, Jen debuts the gown as she walks into the gala to celebrate her “Female Lawyer of the Year” win. Unfortunately, Jen and her designer dress go viral in the penultimate episode for other reasons.

Jen/She-Hulk on the red carpet.

Behind the scenes, Foley found her own sought-after custom designer through the episode’s director, Kat Coiro, who wanted something extra special for Jen’s big reveal.

“[Coiro] was dating Zuhair Murad from one of her previous shows, so we reached out and he graciously accepted this wonderful job of designing a dress for She-Hulk,” she says.

Luke Jacobson’s impeccably neat three-piece suits — with his signature high-break, double-breasted cardigans (or waistcoats, in American) — are, fittingly, tailored. “I wanted them to be special. I wanted them to look like they weren’t standard,” Foley says.

For inspiration, she looked to “The Incredibles” supersuit designer Edna Mode, whose own signature aesthetic references include costume designers Edith Head and Eiko Ishioka, plus fashion legends Rei Kawakubo and Chitose Abe of Sacai. Plus, Foley adds, “There’s a bit of Tom Ford with his glasses.”

When Jen is recruited by GLK&H, she brings her paralegal, best friend and constant fashion influence Nikki with her. “They’re a little fish in water,” Foley says.

While helping Jen with her challenging business, Nikki regularly ignores the buttoned-up office dress code in bold pink blazers from Veronica Beard and Cinq à Sept, a yellow draped mini dress from Alex Perry and a gold sheep-sleeved top from Ganni. Behind the scenes, Foley and Gonzaga bonded through their deep knowledge and excitement about shopping.

“With Ginger, I met my match as an online shopaholic,” says Foley, who bought a fair amount of designer resale from Recess LA for a wardrobe full of labels a paralegal could afford. “Nikki is trying to figure out how to be smart about it and still look like a fashion icon,” Foley says. 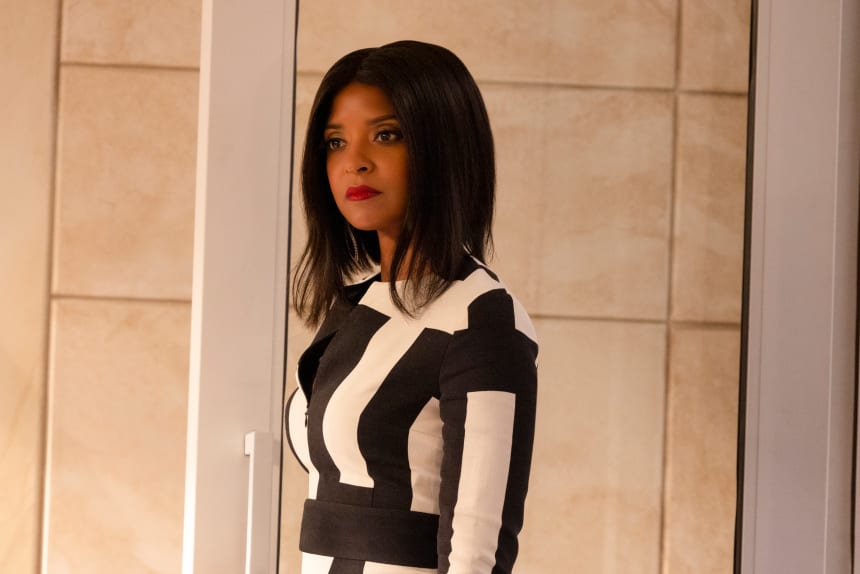 Mallory takes on some names in an Akris dress.

Jen’s absurdly chic and confident colleague Mallory (Renee Elise Goldsberry) keeps her personal life very close to the vest. Even the very nice Nikki can’t get her to drop any tea as they celebrate a recent legal win. Mallory’s consistent aesthetic of body-con sheath dresses by Roland Mouret, Victoria Beckham, Alexander McQueen and Meghan Markle favorite Safiyaa intimidate and impress in the office and courtroom.

“What she wears to work is, in a way, her own armor,” says Foley, who cites an Akris dress with a black and white graphic print (above) as a favorite.

While I kept hoping that Mallory, played by the “Girls5Eva” scene stealer and Tony winner, would erupt spontaneously, Foley was just excited to reunite with Goldsberry.

“The last time I worked with Renee was on ‘Altered Carbon’ and she was wearing tactical gear and body armor,” she says. “It was such a dream for both of us to get her in these amazing, fabulous dresses.” 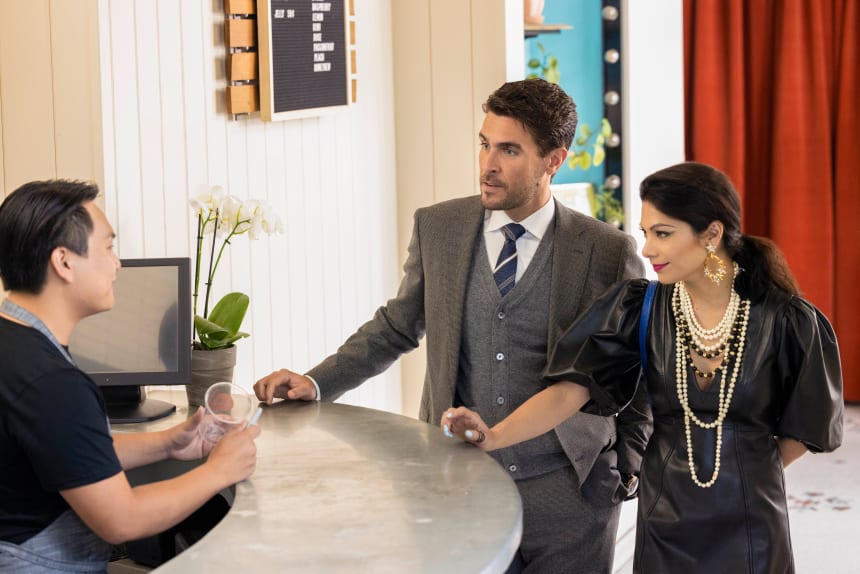 Pug (Josh Segarra, center) and Nikki visit the IV broker in their search for Luke Jacobson.

At Fashionista, we – especially Liza and I – are big fans of Josh Segarra. It’s like his lawyer character, Augustus “Pug” Pugliese, is Lance from “The Other Two,” but if Lance was more academically inclined and passed the bar: They’re both sincere and supportive friends, big hypebeasts and envelope pushers like it’s about their professional wardrobe.

“I wanted him to stand out a bit from that corporate environment too,” Foley says of the chic, woolly aesthetic of Pug’s three-piece suit. “But I didn’t want it to be just a typical cardigan. I thought this guy had a bit of flair — he’d have to mix it up a bit.”

Shockingly, Pug’s suits are not custom made, but from Dutch direct-to-consumer brand Suit Supply. “Everything had a little bit of texture, whether it was a diamond check or a nailhead on the suit,” Foley says. “Just like Nikki was a rule-breaker and likes to change things up a bit, so does Pug, but he still stays within the confines of that environment.” No wonder the two team up to help Jen, starting with finding Pug’s “drip broker” to lead them to Luke.

“I love the whole ‘drip broker’ storyline,” Foley says with a laugh. “It’s pretty cool. Someone tagged me on Twitter and said I was the real IV broker for ‘She-Hulk’.” 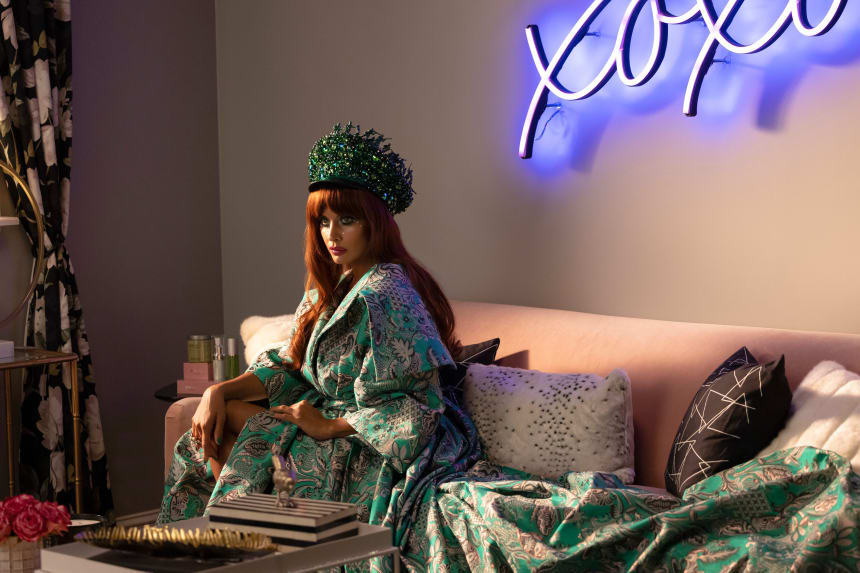 Titania (Jameela Jamil) in a She-Hulk-inspired Vassilis Zoulias dress and fascinator from On Aura Tout Vu.

Branding is critical to social media content creators, especially a (super)power influencer like Titania (Jameela Jamil), who uses legal channels to claim the “She-Hulk” title for herself and her empire. To get the message across, Titania dresses in green from head to toe, like a custom forest green Christian Siriano dress for a personal appearance at her “She-Hulk Beauty” pop-up and all her power shoulder OTT -pants suits.

“That was part of Titania trying to steal the She-Hulk identity—everything she wore prior to the court scene was green, to show she’s the real She-Hulk,” said Foley, who inspired a “huge deep dive” into Instagram and reality star influencers like Christine Quinn and the Kardashians from “Selling Sunset”.

Foley appreciated Jamil’s willingness to lean into the comedic aspect of Titania’s costumes as well: “She wasn’t scared, especially when it came to adding things like the butt pads – which was a hilarious moment in one of the earlier episodes, where you literally see it falls off at some point and you realize everything about Titania is fake.”

This post ‘She-Hulk: Lawyer’ is full of super-powered fashion

was original published at “https://fashionista.com/2022/10/she-hulk-attorney-at-law-costumes-outfits”