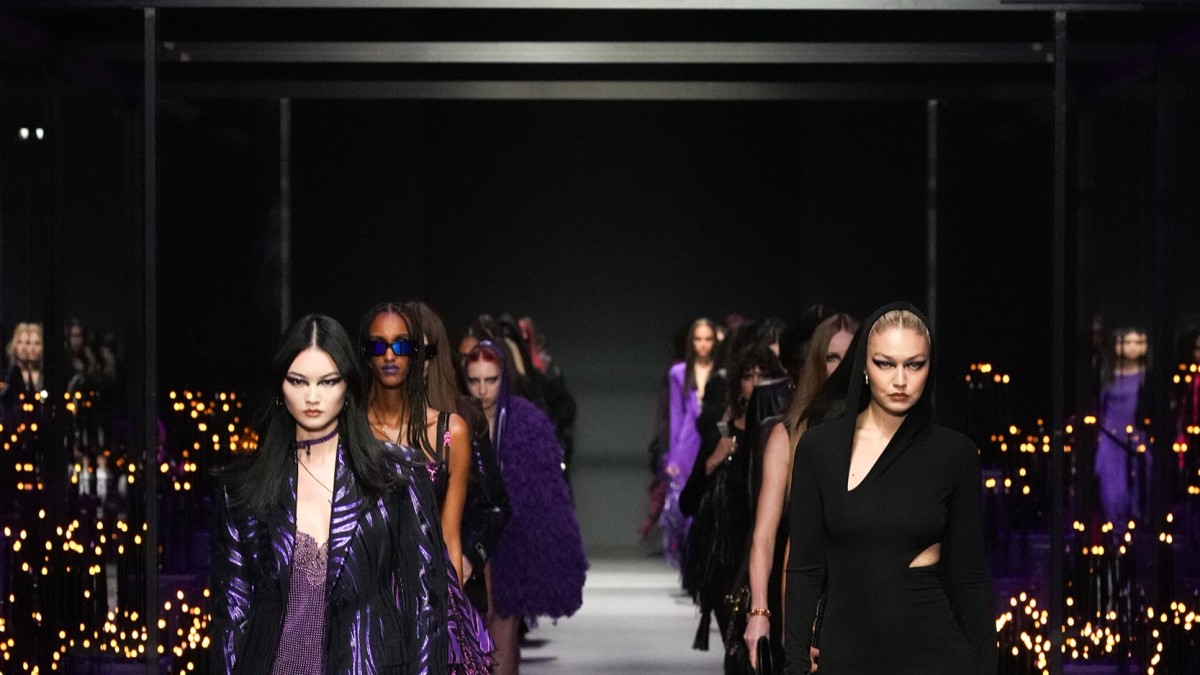 Versace’s Spring 2023 collection is a fascinating display of archival rejuvenation and a modern take on the brand’s tendency to lean into sexiness.

The show started with a romantic piano tease before the music swirled into a funky beat as four opening models appeared at the candlelit start of the catwalk. Blonde Gigi Hadid (whose sister Bella also walked) stepped forward in a long hooded dress with a slit at the rib cage, intense cat eyes and a slit for the leg. “Sex to the Devil” by Icky Blossoms played with edgy lyrics like “Drugs, sex, rock and roll, the devil came, the devil came, the devil came and saved my soul.”

As seductive as it is smart, Donatella Versace’s vision for the coming spring takes inspiration from the ’90s to meet the new millennium in the middle. The show captured the feel of the brand’s iconic catwalks that decade, which turned models like Naomi Campbell and Linda Evangelista into supermodels.

Current models of the moment ran fiercely in sassy looks that nodded to the house’s records and to the present day. The turtlenecks were draped with drama. A wide belt that barely fell at the hips felt like an ode to Look 1 from Fall 1991. Minidresses appealed to the genius of the house with party wear. Leather jackets and trousers showed off a sober quality.

For Versace, the 90s were a time of unimaginable glamor and flashy couture, followed by grief after the murder of Gianni Versace. Spring 2023 feels like a revival of that era with a little less ostentatiousness, but more boldness. Instead of bejeweled bustiers and printed emeralds, there are all-neon babydoll dresses and matching veils. Golden baroque patterns, characteristic of Versace, are interpreted for spring in rhinestones and fuchsia.

Versace’s runways have been known to strategically feature models and celebrities to tell the story of a season or simply make the show the talk of the town. With the 90s/Y2K revival theme of this show, it only made sense to have Paris Hilton close by. A signature of the businesswoman and socialite style, Hilton wore a bright pink sequined mini dress with a turtleneck. Even hotter pink fingerless gloves, stilettos and a pulled back veil provided the finishing touches.

With Medusa watching the show from the printed windows, Versace refreshes the ’90s fantasy for spring 2023. Overwhelmed by the blonde woman, this Versace collection brims with monochromatically styled looks, mostly in black, with prowess.

was original published at “https://fashionista.com/2022/09/versace-spring-2023-review-paris-hilton”