Leighton Meester Talks About New Movie ‘The Weekend Away’ And ‘Euphoria’ 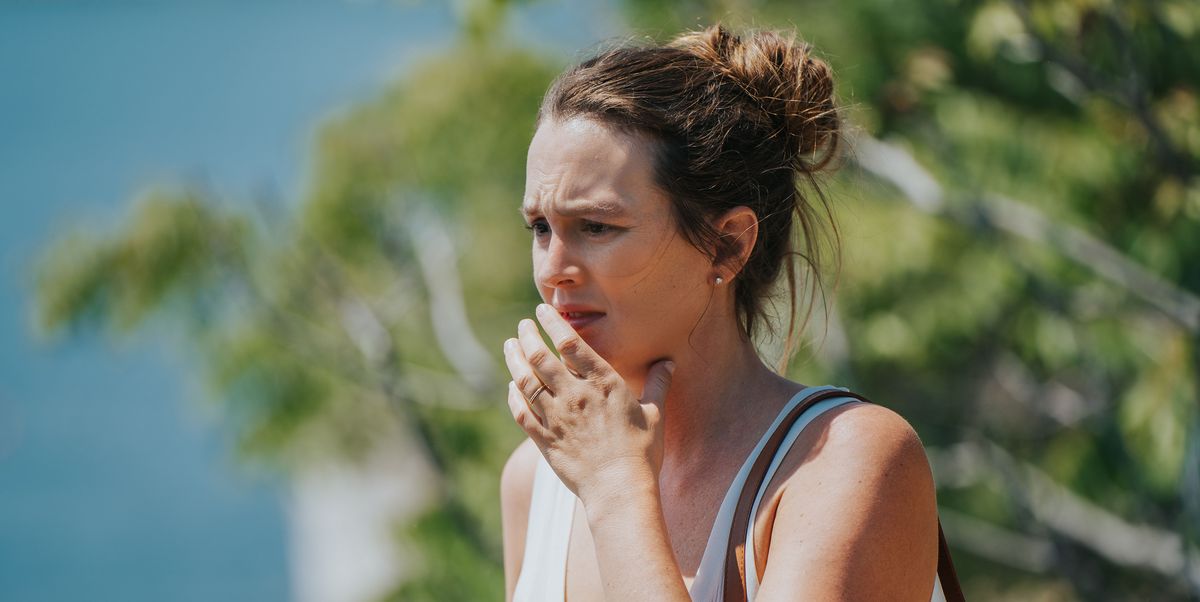 Imagine walking down the street in New York City and seeing Leighton Meester. The actress, famed for her portrayal of beloved Gossip Girl character Blair Waldorf, recently paid a visit to her old stomping grounds, where her husband, Adam Brody — bred from similar teenage royalty on The OC — is filming a new project. This time, however, it was less Nairtini’s and masquerade balls and more kid-friendly activities. As a married mother of two children: “I keep an eye on the playgrounds”, says Meester with a laugh. “That’s really what I’m looking for.” Perhaps in Manhattan, but the actress has also set her sights on satisfying, age-appropriate work.

Her latest role is Beth, a 35-year-old with a 10-month-old child who is accused of murdering her best friend (Christina Wolfe) in the Netflix thriller The Weekend Away, based on Sarah Alderson’s novel of the same name. Meester, also 35 years old with a fairly new baby, was intrigued by the script for obvious reasons. “That was me exactly, per minute,” she says. On a trip to Croatia, Beth struggles not only with being separated from her child, but also with “otherworldly, incredibly dramatic and tragic tension.” Here, more from Meester on her new movie, her thoughts on the Gossip Girl reboot, and why she still hasn’t seen Euphoria.

What felt like the right time to return to the screen?

When I packed single parents on March 3, 2020, I was pregnant [and] I’m going to have a baby, so I thought I’d take some time off, and when the show comes back, great. Then it happened in mid-March 2020. A little over a year later, I had the feeling: [The Weekend Away] was the right project, the right script — I went to Croatia to film it, so it wasn’t too shabby [laughs]† And I felt like my youngest was old enough to be away from him during long shooting days. How I Met Your Father came last minute in the fall⁠. We’ve had a really weird couple of years in terms of work and schedule [goes]plus having a kid really… shakes things up [laughs]†

What was it about this movie that appealed to you so much?

Do you like real crime? Were you a Serial fan?

I really liked Serial – I actually liked all of them, even the non-murder. I understand the interest in it, but I’ve become so incredibly sensitive to it… I don’t know if it’s getting older or having kids or hormones, but I have to pace myself because then I start to say, “There’s someone in there the House!” and it’s too scary. The amazing thing about this movie is that there doesn’t seem to be a good man or bad man; nothing is so clear. Even if suspicious red herring is revealed, you can see where someone could lose their temper – there’s no excuse, of course – but there’s a human element to it. It’s not just a monster lurking.

Leighton Meester as Beth in The Weekend Away.

There seem to be some real parallels… Amanda Knox comes to mind.

I’ve heard that comparison. While it doesn’t quite parallel that case, wow, it puts you in that main space of, “What would I do if I was really stuck in a mystery, and this thing happened, and I’m pretty sure I haven’t done, but I don’t know.” The other part I had a real connection with was being thousands of miles away from your kid and feeling powerless and not quite stable; like, “Well, at least I can go to my family at night.” You’re stuck, and it is scary.

Did you feel a similar guilt as Beth being away from your daughter while filming?

Yeah, that’s not going away. There are no banking hours with a child. I just spent a whole weekend doing everything with them, and now I have to go to work all day; they say, “But you’re not here now.” I actually had to separate my kids during filming, so I kept my son, who was 10 months old at the time, and my daughter, who is six, with my husband back to the states where he worked. That was by far the longest I’ve ever been without my daughter, but I couldn’t be separated from my son because he was breastfeeding. The reunion was heavenly.

Have the roles you’ve been looking for changed since becoming a mother?

I think anyone, especially an actor who gets older, will probably find the roles more exciting and interesting, regardless of whether they’re playing a parent or not. When you get older, you don’t just stand there, which is nice. 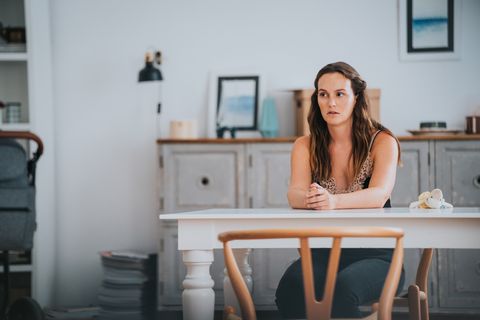 Leighton Meester in The Weekend Away.

Are you referring to ageism in Hollywood?

Hell yes. It’s nice to have a fantasy and say, “That 35-year-old person could also be 40 or 30.” Let’s put people in different roles of different ages or from different backgrounds. I get it and I’ve been there – there is an obsession with the youth. If you do it right, you will hopefully age. I feel like that’s the point. There is a real difference between what women say: ‘I feel better as I get older; I feel more confident; I feel less insecure; I feel more libido’ – and yet media and culture say, ‘No, you’re worthless now; you are invisible.” We need to find a way to navigate through that. I think it’s getting better. Listen, I’m 35 and I think that’s young; and I also started my career so young and was so young on TV and took advantage of that so young. At that moment I was not aware; I was like, “I’ll stay young forever!” So to understand that and how life goes is interesting. It’s interesting to be in this business for so long.

What was your wildest weekend away?

When I got married my girlfriends decided to take me out to dinner and they released this game where I think the goal is you get a right or wrong answer and you drink. There were no real rules, just “get drunk”. And I remember I was extreme [drunk]† The next morning I was just laying in bed thinking, “I need a bagel.”

There is a memorable episode of Gossip Girl where Blair plays a similar game at her bachelorette party.

Luckily I wasn’t arrested. But I did it [get arrested] when I was in my late teens or early twenties. Before moving to New York for work, I lived in a house in LA with three or four roommates, and we had parties that often got really out of hand, and the police came a few times. One of the times we had so many people [that] it would be impossible [to get out of], and they threatened us with a ticket, so we got a ticket, because what else could we do? We had some claps. I look back and I think, “Was it fun? That was pretty dark.” But it’s good to have had that time. [Laughs.] 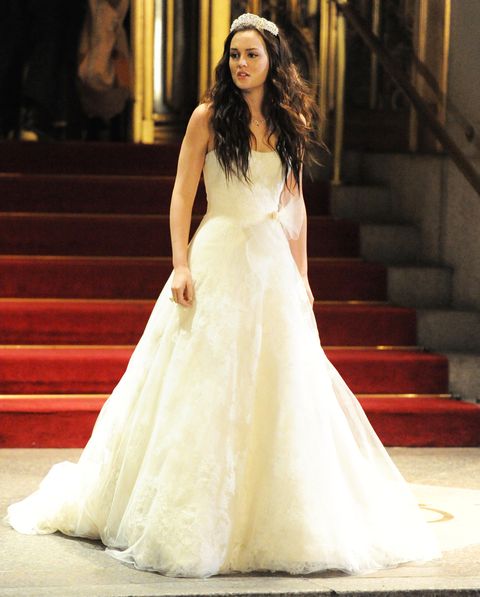 It was the same when I was growing up in New York.

Even if you smoke a joint on the street [in New York] they say, “You’re under arrest!” I think it’s different now. I was just in New York and I smoke a lot of weed, so I feel like it might be a little more accepted.

Have you seen the Gossip Girl reboot?

i watched it; I love it. I’m really glad they found a new way with it. It was like… is it weird to call it iconic when you’re in it? It really is that evergreen. Still, young women will come to me and I’m like, “Wow, you weren’t born when we started.” It’s interesting that it can remain something that means a lot even to this generation. And so the fact that they can capture some of that magic while making it its own thing is quite an achievement and really cool.

What else have you been up to? One of my favorite Inventing Anna memes is from Blair Waldorf, who says she would have clocked Anna Delvey immediately.

[Laughs.] That’s really funny. I actually just started that show because everyone asks me if I watch it. That and Euphoria. However, I don’t know if I can. Just because… wow.

People on Twitter have also been talking about your collaboration with Cobra Starship for “Good Girls Go Bad.” Are you planning to record music again?

I love that. That was a fun time. I will continue to make music and write and sing – I would like to perform soon, someday. I will probably release music within this year. I didn’t really have an affinity with pop music in terms of writing or performing [goes], but it felt like that was what I was going to do, so I just went with it. Then I thought, “No, this isn’t right.” So I ended up breaking ties with my label amicably, and I released an album in 2014 and toured with a very different sound. So, [the new music is] sort of an evolved version of that sound. I still get chills watching live theater; we went to see My Fair Lady at the Dolby Theater which was a really great production and I got emotional. It made me go, “I want to do it again.”

This interview has been edited and abbreviated for clarity.

was original published at “https://www.elle.com/culture/movies-tv/a39328113/leighton-meester-the-weekend-away-gossip-girl-euphoria-interview/”