On Friday, engaged couple Kourtney Kardashian and Travis Barker dressed up for an evening at the Roxy Theater in West Hollywood, where Avril Lavigne performed to promote her new album Love Sux. The cute couple looks fashionable and sexy, neither of which leaves much to the imagination with their looks.

Kardashian wore a short, fitted, bell-sleeved velvet dress with a mock turtleneck. Her legs were emphasized even more by a pair of black, thigh-high boots with a high heel.

Barker had no shirt and was mainly decorated with his many colorful tattoos. He wore a navy blue cap and low-slung shiny black trousers over black shoes. He added a pop of color with a red belt and carried his white drumsticks in one hand as they walked, his arm over Kardashian’s shoulders. Her only accessory was crimson nails and she kept her makeup and sleek bob simple.

The couple met their friends Megan Fox and Machine Gun Kelly, who are also newly engaged, during the show. Machine Gun Kelly appeared on stage herself and is featured on the album for Lavigne’s second track on the album entitled ‘Bois Lie’. He wore a graphic T-shirt in pink and black, to match his freshly dyed hair, in a dusty rose.

Barker, who co-produced the song, also performed onstage as Lavigne sang and Machine Gun Kelly fired a bottle of champagne and hit the fans in the front row with sparkling wine. 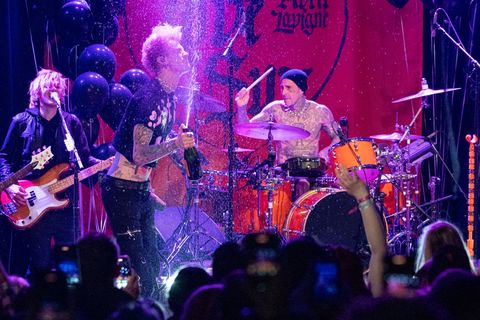 Barker and Kardashian have planned their wedding, a source told the Daily Mail.

†[Kourtney] doesn’t want any details about her wedding to be released because she wants it to be a surprise for the guests,” the insider said. “But it will definitely be a fairytale wedding.” 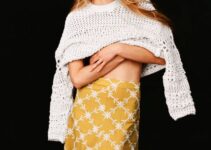