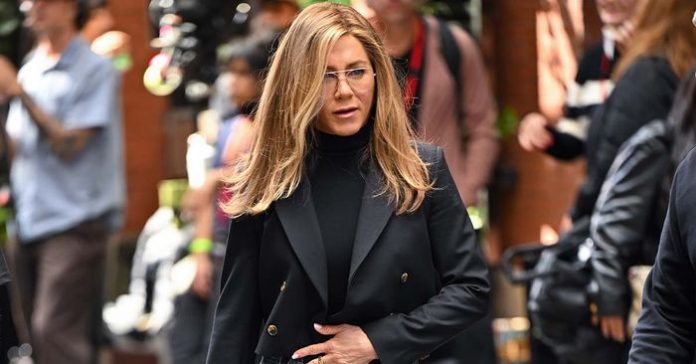 Just in time for fall, Jennifer Aniston has exerted her influence to bring back *the* boot season denim trend from the depths of fashion purgatory. While filming The Morning Show in midtown Manhattan, the Friends alum was spotted wearing none other than bootcut jeans, a style that has gone largely unworn since the 2010s. The silhouette, which hits at the knee and flares out to enclose a pair of boots, was replaced first by skinny jeans and later by the vintage-inspired straight and wide-leg jeans that are prevalent today. But with a fan in Aniston, bootcut jeans could easily become the next big thing in the denim world.

Wearing her Favorite Daughter dark wash jeans, the actress wore a pair of black pointed boots, a cropped blazer with gold buttons and a fitted turtleneck sweater, giving us as much outfit inspiration as her Friends character Rachel Green once did every Thursday night on NBC. And with autumn coming at any time, this fall ensemble couldn’t have come at a better time. Check out Aniston’s exact bootcut jeans below. Trust me – you won’t be alone.

was original published at “https://www.whowhatwear.com/jennifer-aniston-bootcut-jeans”