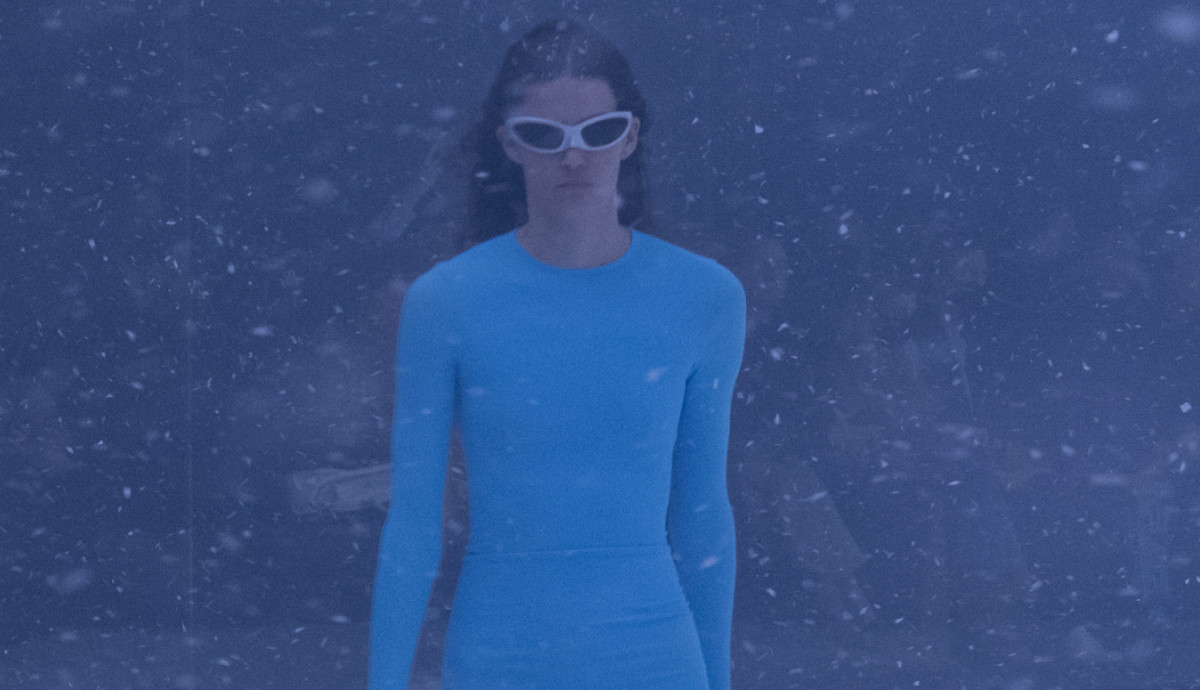 Demna has left his undeniable mark on Balenciaga since he took over the house in 2015. But he’s probably never put so much of himself into his Paris Fashion Week presentations for the brand as he has this season.

At Balenciaga’s fall 2022 runway show on Sunday, guests were greeted by an oversized two-tone T-shirt featuring the colors of the Ukrainian flag and a letter written by the mononymous designer, the full text of which is below.

“The war in Ukraine has caused the pain of a past trauma that I have carried within me since 1993, when the same thing happened in my home country and I became a refugee forever. Forever, because that is something that stays in you. The fear, the despair, the realization that no one wants you, but I also realized what really matters in life, the most important things, like life itself and human love and compassion.

That’s why it was so incredibly hard for me to work on this show this week. Because in a time like this, fashion loses its relevance and raison d’être. Fashion week feels like some kind of absurdity. I thought for a moment about canceling the show that me and my team have been working hard on and that we were all looking forward to. But then I realized that canceling this show would mean giving in, surrendering to the evil that has hurt me so much for almost 30 years. I decided that I can no longer sacrifice parts of myself to this senseless, heartless war of ego.

This show needs explanation. It is a dedication to fearlessness, resistance and the triumph of love and peace.”

Demna was born in Georgia, but fled with his family during the Civil War in the early 1990s; they spent time in Ukraine before finally landing in Germany. He has previously reflected on the conflict in his native country and its aftermath in his work, namely in the Vetements Spring 2019 collection. Amid the developments of recent weeks in Ukraine, the way Balenciaga’s fall 2022 collection explores this idea of ​​resilience feels much more sobering.

The Kering-owned brand made its latest debut in a standalone winter landscape – a sort of snow globe runway, where the models prop up the elements in their stretch dresses and catsuits, turtlenecks and trousers, cap sleeves and sleek oversized coats. Originally the set was intended to comment on climate change, he told British Vogue backstage: “Maybe in 50 years people will have to go to these places to have an artificial experience of a certain weather event that we take for granted. But on somehow it turned into something else, which often happens with my shows.”

Balenciaga was one of the first major luxury brands to respond to the ongoing crisis in Ukraine, dedicating its social media profiles to resource sharing and partnering with the World Food Program to provide food aid to those displaced by the Russian invasion. The brand’s fall show opened in 2022 with Demna reading a poem by Ukrainian writer Oleksandr Oles, in Ukrainian.

“It’s only innocent people who die in war. I went through that and blocked it for 30 years until I started reading the news last week,” he told British Vogue. “It brought back all that pain, like anyone who has experienced it. The message is love, always. And fashion has to take that, at least in terms of taking it.”

The fall 2022 palette is largely subdued, opening with mostly black, gray and brown before introducing a touch of white, some strong florals (another feature of Demna’s Balenciaga) and other eye-catching prints (see: the catsuit with branded packaging tape of which an example has been viewed by Kim Kardashian in the front row). The most poignant use of color, however, was reflected in the closing looks: a yellow Balenciaga tracksuit, followed by a blue long-sleeved dress with a train.

Check out the entire Balenciaga Fall 2022 collection in the gallery below.

was original published at “https://fashionista.com/2022/03/balenciaga-fall-2022-collection-review”